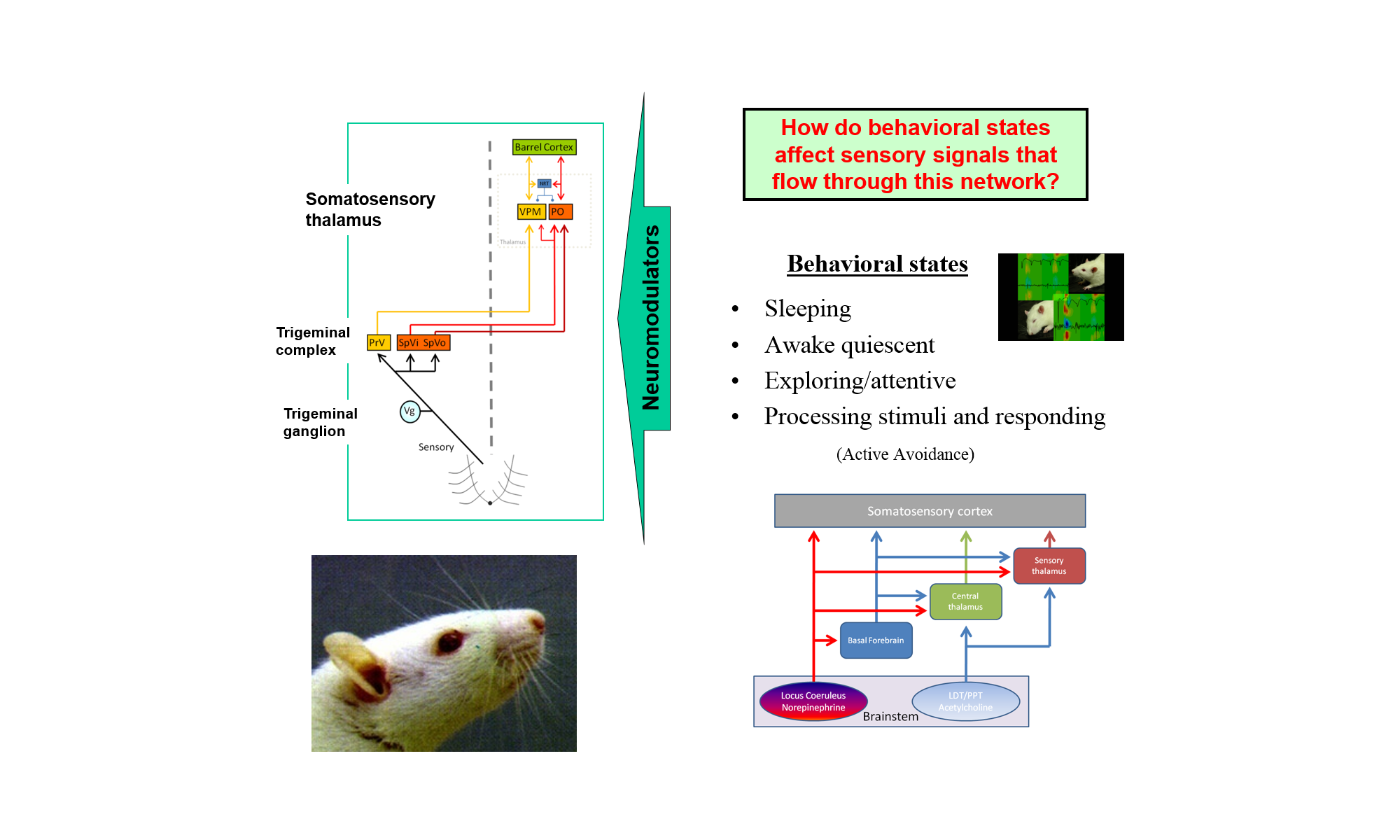 Waking and vigilance suppress sensory responses in the neocortex

The image below shows an experiment in which we recorded field potential responses in the somatosensory (barrel) cortex of a freely moving rat evoked by stimulating the thalamocortical pathway. We discovered that the thalamocortical evoked response is suppressed (reduced) when the animal is awake compared to when it is sleeping (slow-wave sleep).  This was neither known nor expected at the time.  Panel B shows the amplitude of the evoked response measured every few seconds (black circles are a running average of the red circles).  The other panels serve to characterize the state of the animal. During the initial 10 minutes, the animal is sleeping rolled up in a corner of the cage (slow oscillations 1-2 Hz are evident in the power spectrum in panel A, there is no motor activity measured with photobeams and the whisker pad EMG is flat). Shortly after, the animal spontaneously wakes up (as evidenced by motor activity, whisking EMG, and power spectrum).  Intriguingly, the evoked thalamocortical response is much smaller when the animal is awake compared to sleep. The red circles also show that there is significant variability during both states. Sensory suppression in the anesthetized brain

We also found that stimulating the brainstem reticular formation (BRF), which awakes the anesthetized brain, produced the same effect as natural waking; sensory (whisker) responses evoked in the barrel cortex are suppressed.  The image below shows this by recording field potentials, single-units, current-source densities, and intracellular responses evoked before and after BRF stimulation. Responses become suppressed and less variable. The intriguing finding that sensory responses are suppressed during waking, or BRF stimulation, leads to the obvious question: why? We found that sensory suppression is useful to focus receptive fields and sensory representations. The image shows a 16-ch silicon probe placed horizontally in layer IV to record sensory responses evoked by deflecting a single whisker. BRF stimulation suppresses the spread of cortical activity so that the representation becomes more circumscribed to a single barrel. This should be useful for discrimination. We discovered that sensory suppression indeed occurs during complex behavior for the conditioned stimulus being detected and this leads to changes in frequency-dependent adaptation. Importantly, the suppression is related to the state of vigilance and not the learning per se. The video shows a field potential recording in the whisker region of the somatosensory cortex (barrel cortex) during active avoidance behavior.

The overlaid traces correspond to the first 10 stimuli of the 10 Hz train that signals the footshock.  When the animal is learning, the cortical evoked responses are small and similar to each other (there is little sensory adaptation). However, when the animal has performed many trials (2nd part of the video), the response becomes very large to the 1st stimulus in the 10 Hz train and it depresses for subsequent stimuli (it shows much more sensory adaptation). This is not caused by learning, but by the state of the animal.  Note that when the cortical evoked responses are small, the animal is very alert. When the evoked responses are large, the animal is quiescent (~taking a nap). Neural circuits change their response properties during different behavioral states to allow adequate information processing as behavioral contingencies demand.  This also shows that when animals are well-trained and can both predict and control the threat, they show little evidence of fear (napping ≠ fear). We noticed that every time the thalamus increased its firing spontaneously, the cortex would show signs of “activation”.  During activation, slow cortical oscillations (typical of slow-wave sleep) are abolished. In essence, the cortex wakes up.  This led us to test the idea that thalamocortical firing might be able to cause cortical activation. We discovered that by controlling the firing of thalamocortical cells in the somatosensory thalamus, we could control the state of the related somatosensory cortex.  Moreover, we performed this control by applying neuromodulators into the somatosensory thalamus, which provides a feasible mechanism for how this may occur normally. Thalamocortical neurons in the sensory thalamus are also sensitive to behavioral state but their responsiveness is enhanced, not suppressed

The superior colliculus is highly sensitive to state changes

Recording from the superior colliculus in freely moving rats we discovered that cells change their activity quite a bit depending on the behavioral state.  This is shown in the following image. Note how the firing of the recorded cell varies depending on what the animal is doing and as the animal transitions between states. [SWS, slow-wave sleep; AWIM, awake-immobile; ACEX, active exploration]